The magnificent Longines Avigation Watch Type A-7 USA Exclusive Edition has arrived, a reissue of a classic 1935 American Army model in a limited edition of just 100. Baroque Access has all the details

Dedicated only to the US, this new limited edition Swiss timepiece is endowed with plenty of heritage. The Longines Heritage Collection particularly resonates with collectors based in the US, as its history is full of American events. Longines watches were used to time horse races in New York as far back as the late 1800s. A Longines timepiece was also used as the official timekeeper for Charles Lindbergh’s historic solo transatlantic flight in 1927. At that time, a Longines pilot watch was already in the pipeline. Longines has also produced various watches for the US railroads, US Army and US Navy. One of these, the Lindbergh Hour Angle Watch, was created in 1931.

The new limited edition Longines Avigation Watch Type A-7 USA Exclusive Edition chronograph draws on all of these historic ties with world aviation and is inspired by the performance and precision of its predecessors. In fact, the design is inspired by an original model created in 1935 that was ordered for use in the US Military. 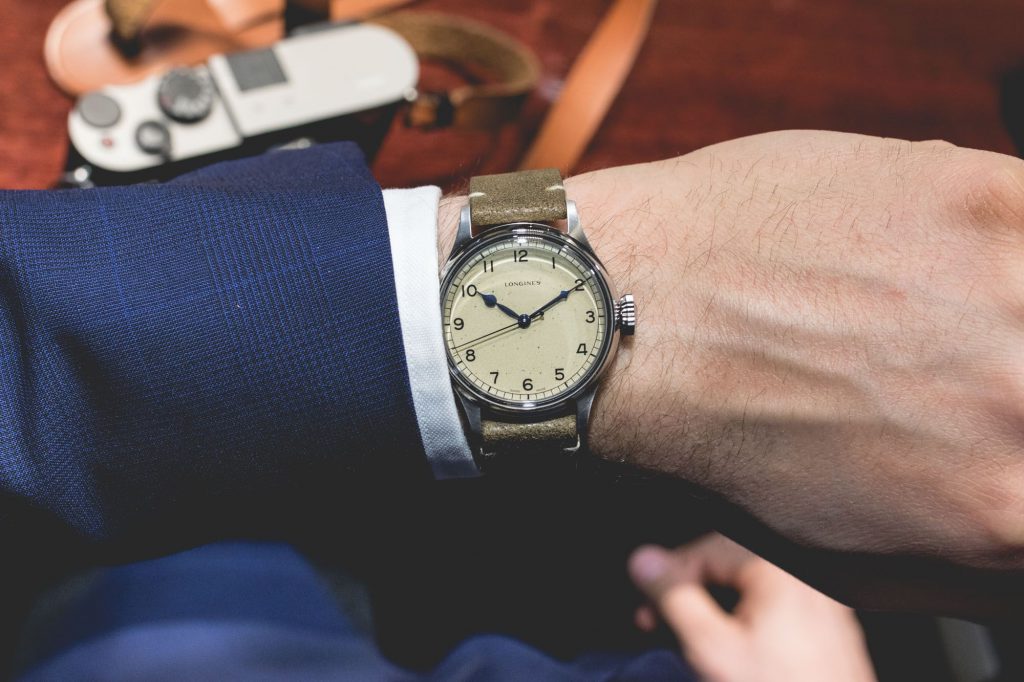 The watch features a 44mm stainless steel case with a self-winding L788 caliber and a column-wheel movement – all exclusively developed for Longines. The chronograph functions (stop, start and reset) are all operated by pressing a single push-piece that is located in the fluted crown.

The grained dial features a black graduated shading to recreate the vintage watch dials of the 1940s– best of all, each is unique. No two are the same. The beige dial is angled at 40 degrees to the right and displays 10 Arabic numerals that are in contrast to the face. This font is just slightly different from the extremely popular Longines Heritage 1945. This unique detail was originally designed by Longines so that pilots could easily read the time without having to release the controls to do so. The strap is black distressed leather and there is a commemorative engraving on the case to identify the uniqueness of each of the 100 limited edition pieces.

Every one of the 100 timepieces comes with a certificate of authenticity, confirming that it is one of a limited series of 100 pieces, collectively called the Longines Heritage Military.

The watch was originally displayed at Baselworld 2018 and received a lot of attention for its vintage yet timeless, classic style.