Walk With me Through Mykonos: An Epic Journey Through Greece

Mykonos: Where pigeons are pelicans, night is day as day is night, and the least interesting thing about the water is that it’s warm. Let’s go…

Coming all the way from Chicago, it’s sort of like there’s music playing- just not the music I’m used to. Replace car honks and the exhuming gasses of busses and the raspy crawl of pigeons walking that fine line between owning the place and nearly-but never quite- being run over. Replace “I’m running late,” and replace “I’m so stressed I lost my appetite” (so give me a Dunkin Donuts). Replace the need for caffeine with the desire for its taste and the time to taste it. Replace deadlines with squiggly marks you leave in the sand that you actually have time to look at once they’re made. There’s plenty of pictures out there already, but in this rare moment, here you are, seeing yourself on the sand, and it’s lovely. Open your eyes as the “I’m running late’s,” and the lost appetites fade into the sky behind you because you’re headed to a place with a different soundtrack.

Let me help you picture it: when it’s not the music blasting in a nightlife that rivals Ibiza, then it’s the sound of, well-if quiet had a sound, it’d be filling this place up. And that’s saying a lot because the walls are just more sky. The things we buy at Sharper Image, the thing with “on” buttons, the things with volume control, that hiss calmingly to diffuse the noise of our cluttered metropolitan minds, leave it at home. A breeze so full of the sea that it resists accurate description, but trust me on this one – it’s salty like popcorn, and the Grecian village-town of Mykonos is an all-encompassing and three-dimensional vision you do not want to miss.

Step 1: Make that step literal in Little Venice. Take your feet out of your sneakers and put on something that lets those puppies feel the breeze as you meander past fishing houses originally built here in Little Venice in the 1700s with balconies still hovering, and hovering still, over the sea. These homes, some converted into shops, galleries, cafes, and a non-stop nightlife of bars and restaurants, used to belong to captains or wealthy merchants believed by some at the time to be pirates! But for your purposes, come to Little Venice to watch the sunset, resume or revive your painting skills, or enjoy some delicious food and wine – getting a glint into one of the longest histories of wines on earth, by the way, enjoyed by Grecian people since ancient Neolithic times. It is said that Mediterranean peoples transitioned from what was called “barbarism” into the societies we know now because of their cultivation of olive oil and wine- thanks to their undeniable role in trade and settlements of surrounding areas. And if that were not enough riding on two delicious forms of sensual entertainment, anytime you drink wine in Greece, you might raise your contemporary glass filled with the purely processed wine made with any combination of hundreds of indigenous grapes that make Greek wine so famously itself, and clink it in your imagination with Aristotle’s “kylix,” a broader and hand-made vessel, and puff your chest and take after Socrates in your very own way. Just don’t think you’ve discovered hangovers – they’ve been around for a very long time. 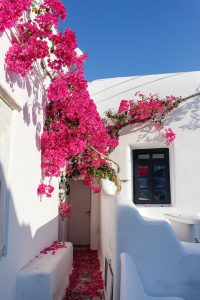 Step 2: Remember that you are walking on history, both verifiable and mythological-Grecian culture is, after all, one of the oldest and most influential on earth, a survivor, if you will, and so, from where I’m walking, they’ve earned the right to pride themselves equally on both the earth-bound and sky-bound versions of what has happened here. Let the wind glide through your fingers as you sit on some big rocks and note that Mykonos is one island in a batch of them called The Cyclades, but it is the only one colloquially named for just that breeze. Note that if Hercules lured and killed the “invincible” giants here in a great battle called “The Gigantomachy,” you’re surely strong enough to sit by the water on the rocks- the biggest of which is said to be the petrified corpses of those fallen giants- and try to take it in. You’re sitting on history, both geological and space-bound, both dynamic and cast in stone, and you, sentient and English-speaking vessel of the present tense, from wherever it is you came, have brought yourself to its feet. And make sure to catch a glimpse of the iconic windmills – built and used by the Venetians in the 1500s and only becoming temporarily obsolete in the early 1900s – trust that they are, many of them at least, fruitfully repurposed in the present as homes and, in some cases, vaults for historical documentation. Talk about history inside of history! Or don’t trust me – make a friend and see for yourself and then watch the sunset from one of Mykonos’ 25 beaches on the Aegean sea, a body of water of incomparable importance in the history of Greek civilization even to the present. 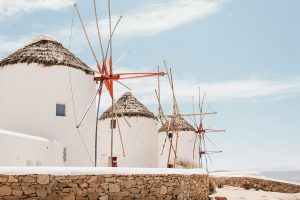 Step 3: Be with people- whoever you are- and stay up as long as you like. As easy as it is to feel the warmth of the sunlight and the tingle of the breeze and the glitter of the water on all sides, and as sociable as the pelicans strutting around Little Venice are-experiencing Mykonos can’t really be done all by yourself– so be with people, whether you brought them with you or you found them at one of the many restaurants, bars, or night clubs dazzling the scene that have earned Mykonos the nickname, “The Ibiza of Greece.” When a place is lit up 24 hours a day, it begs the question – what is time?! And for a culture that played a large hand in defining some of the most essential tenets of everyday living in Western culture, it is refreshing to bathe in a new valuation of the sun: sometimes, truly, it is the only marker between yesterday and today. 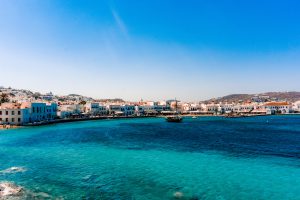 Step 4: Stay at a villa, and go on the waters. I don’t think anyone pictures Chicago hail storms and Seattle rain when they travel to Greece, but even with “unbeatable weather” top of mind, it’s overwhelming to recognize all of the very viscerally rewarding ways to enjoy Mykonos views as a tourist – from traditional sailing on a yacht on the one hand, to snorkeling, scuba diving, parasailing, and jet skiing to on the other. The villas on Mykonos are completely stunning. Whether you want low-profile, spacious, and silent or moments away from town, make no mistake, you’ll have your pick, and it’ll be an integral part of why you want to come back next year. 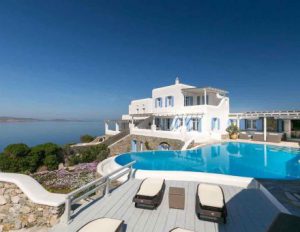 And lastly, scramble up the steps – do 1 and then 2, do 4 and then 1, skip 3 and then hit it on your way to the airport, or don’t. There is no right way to do a vacation to a place as real as this, with myths this old, with energy this young, with beaches so plentiful and wine so pure and sunsets so very soothing – there is only you in a space that is as old as recorded history and simultaneously this new to you. On the flight back, dare to let your mind wander-who are you in Greece and what do you feel like feeling in Mykonos?