What Secrets Does Bodrum and One of its Seven Wonders of the Ancient World Hold?

Bodrum, Turkey: Where It’s At:

Travel-thirsty readers are on the lookout for luxury destinations that are worthy of the media frenzy of Barbados and Bali but have still managed to fly under the radar, at least the American one–so we give you a little 101 on Bodrum, Turkey–or, The Bodrum Peninsula to be precise, which sits on Turkey’s southwest coast on the shores of the Aegean Sea, just an hour flight from Istanbul. The Bodrum Peninsula has become a choice destination for global powerhouses-ranging from Jeff Bezos to Ukraine’s President Zelenskiy, Norway’s Princess Martha Louise, and other elite travelers who make fewer headlines but like their sun streaming down on a glistening sea all the same. I think it’s safe to say that many noteworthy travelers to Bodrum, Turkey have their choice of luxury villas to choose from. So why, Bodrum?

Sure, let’s call it the St. Tropez of Turkey, as many have come to, for a moment. As you’d expect from any marvelous salivation-inducing luxury seaside locale, you can go to Bodrum to spend the day sunbathing, relaxing deeply at spas and beach clubs, fine-dining at seaside restaurants and bars, and setting off from the marina to ride the adjacent waves of the palm-lined waterfront of warm seas ready to be dipped into or explored through water sports or on a superyacht. And on summer nights, you can enjoy dancing and conversation that echoes onto the patio tables of restored ancient architecture into bars, restaurants, and houses on the very waterline of the coast (speaking of which, you’ll notice that most houses are painted blue around the windows and doors – but I bet you can’t guess why! It’s supposed to keep scorpions away). And at dawn, you can make your way back to your villa by way of Mediterranean streets designed for optimal shade.

But what makes Bodrum, Turkey evermore so idiosyncratically appealing to its visitors is not what it has in common with other luxury locations, but what it does not. Bodrum is not only beloved for its unique, white plastered back streets, its tangerine groves along the beach, its pirate-themed boat parties (can’t get much more specific than that), its aromatic markets selling soaked almonds and mussels with lemon, its thousand-year-old olive trees, and its choice of electronic, disco, cabaret, or Turkish drama music, or some combination thereof, in the energetic post-dining nightlife. Bodrum also quietly and not-so-quietly offers two irresistible charms: a thriving arts scene and the deepest of histories, two elements impossible not to at least in part attribute to one another. 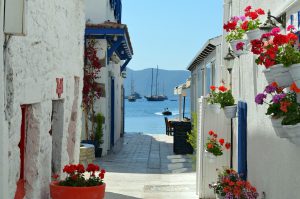 Bodrum, Turkey: Where It’s Been

Bodrum quietly offers a seemingly endless history specific to the many, many years of its consistent inhabitation since its ancient origins. Come ready to appreciate the preserved, modified, and impressively recorded history with the same jaw-opened lust you might’ve welcomed your fish course with at a seaside restaurant. Take the early 15th Century Castle of St. Peter, once completely surrounded by sea, or take The Museum of Underwater Archaeology- the home of discoveries made at shipwreck sites in the Turkish Aegean over time since the Bronze Age- that this castle has been converted into. Bodrum was, after all, once upon a time, called Halicarnassus of Caria. The Carians are credited with having taught the Greeks to use handles on shields. Homer references the Carians in The Illiad, calling them “barbarous of speech.” Did I mention that Halicarnassus is the birthplace of none other than Herodotus, who is known as “The Father of History”? Herodotus wrote of Artemisia I, a notably “manly” military commander, the perhaps ahead-of-her-time actions of whom elicited this quote from Xerxes: “My men have shown themselves women and my women, men.”

While under Persian control, King Mausolus did everything in his power to fund and build The Antique Theater – including placing a tax on hair longer than shoulder length! This theater, in addition to being the only surviving structure from Classical Age Bodrum, is thriving today after its restoration in the 1960s, used by the people of Bodrum for festivals and concerts and open to the likes of you for the incredible view its height provides of the active marina below.

Nearby are Hellenistic and Roman-period tombs, many of which contain literal tear jars, used to collect tears from mourners and then left with the dead at burial. Accounting for how many cups a dead person had in their tomb was kind of like an ancient popularity contest – the more cups, the more you were apparently loved. Speaking of the dead, King Mausolus’s tomb, or, “The Mausoleum of Halicarnassus,” regarded today as one of the Seven Wonders of the Ancient World and left in Bodrum in humble ruins for the viewing, finished construction under King Mausolus’s proceeding ruler and sister, Artemisia II, between 353 to 350 BC. According to history, Artemisia was another notable military presence of this period, and her gender did not go unnoticed even in real-time. In fact, the Rhodians disapproved of her position of power as a female military commander so much that they sent a fleet to overthrow her. Classic Artemisia, she defended herself and captured their city in the process. 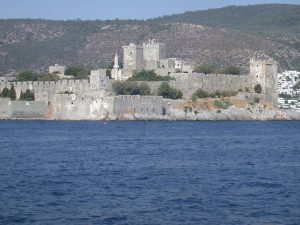 Facts Rivaled Only By The Art They Have Created

One of the best things about Bodrum is that, from all of these wonderful historical turns it’s taken on the road to becoming what it is today, it has continuously attracted some of the key reflectors and contributors to what we call culture: artists. In Ancient Halicarnassus, fishermen played a central role in attracting writers and artists and craftspeople, and of course, the gorgeous amphitheater aforementioned was in full and original swing. But even in more recent years and to the present, Bodrum has collected the favorable reputation of being the center of the Turkish art community, hosting many small galleries, the rehabilitated Antique Theater, the Museum of Underwater Archaeology, and a generally open, amiable, and energetic Bohemian atmosphere. Dappled with painters, jewelry makers, street exhibitions, performances, and an overlying entrepreneurial tendency, Bodrum’s reputation as a creative hub makes perfect sense to me.

Halicarnassus-turned-Bodrum has been ruled by Carians, Persians, Romans, Egyptians, Byzantines, and then Turks, Ottomans, and later, Italians. With the success of the Turkish War of Independence, Bodrum finally began to become the site of fun, romping, sailing, dining, dancing, and true relaxation–not to mention an appreciation of the road to this very state of present being-that lands it on the map of most desirable travel destinations in the world. Come to Bodrum to appreciate its origins as Halicarnassus, and come hungry, tired, and eager to eat, sleep, and see breathtaking things, and you will not be disappointed.